You won't believe the stunning beauty of the Giants Causeway - See for yourself!

Giants Causway
The Giant’s Causeway is one of the most incredible sites on earth.

The stones were either constructed by an undersea volcano’s geological processes or by a giant named Finn McCool, who lived and battled around the north Antrim Coast, depending on what you believe.

The Official Guide to the Giant’s Causeway takes pride in providing a site where you can discover enjoyable and instructive guided tours for you, your family, and your friends.
Spend a day touring The Giant’s Causeway from Portrush, Belfast, or even Dublin to make your visit really unforgettable. You will have a good time.

Northern Ireland was once home to a giant named Finn McCool, according to legend (also called Fionn Mac Cumhaill). When another giant, Benandonner, attacked Ireland from across the Irish Sea from Scotland, Finn replied by ripping up broad chunks of the Antrim coastline and flinging them into the sea. Finn was able to reach Benandonner via the newly-created Giant’s Causeway, which provided a shortcut over the sea.

This, however, proves to be a horrible decision because Benandonner is a gigantic giant that eclipses Finn! Finn flees to Ireland in order to save himself, and his quick-witted wife disguises him as a baby. When Benandonner arrives, he notices Finn dressed as a baby and realises that if a baby can be so enormous, the father must be much bigger than Benandonner!

Benandonner ran back to Scotland after realising this, ripping as much of the Causeway as he could in his desire to put as much space between himself and Ireland as possible. As a result, the legend of the Giant’s Causeway was born.

A volcanic eruption created the Giant’s Causeway 50-60 million years ago. Due to the eruption, the ground was made of chalk, a soft substance that was easily penetrated by molten basalt. As the basalt lava cooled, it began to shrink and fracture, forming the hexagonal pillars that we see today. 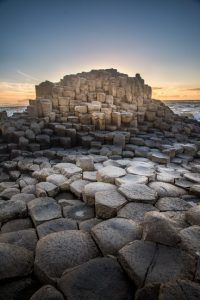 Belfast Beer Bike If you’re looking for a unique and fun way to explore Belfast, look no further than…