Experience the rich history of Carrickfergus Castle: a timeless treasure

Carrickfergus Castle
Carrickfergus Castle has been an outstanding landmark on the Northern Ireland landscape for over 800 years, whether accessed by land, sea, or air. The castle was used as a military stronghold until 1928, and it is now one of Ireland’s best-preserved mediaeval buildings.

The fortress has been besieged by the French, Irish, Scots, and English at various times. Carrickfergus Castle was erected in 1177 by an Anglo-Norman knight named John de Courcy, who used it as his headquarters after conquering eastern Ulster. He thereafter governed as a minor king until 1204, when he was deposed by Hugh de Lacy, another Norman adventurer.

It was surrendered to French troops under the command of Francois Thurot in 1760, following a severe battle in Carrickfergus. They robbed the castle and town before escaping, only to be apprehended by the Royal Navy.

The castle has been rebuilt three times and still exists today, with six of the original 22 guns lining the sea viewing walls. Since then, it has served as an armoury and garrison during World War I, as well as an air-raid shelter during World War II. It was handed over by the British army to the Northern Ireland local government to be preserved as a historical site.

On his wedding day, April 29, 2011, Prince William of Wales was named Baron of Carrickfergus. The title is now purely symbolic, with no official ties to the castle. The daily Game of Thrones trip from Belfast makes a pit stop here as the first port of call seven days a week before continuing on to the Giants Causeway and seeing Dunluce Castle, another famous castle. 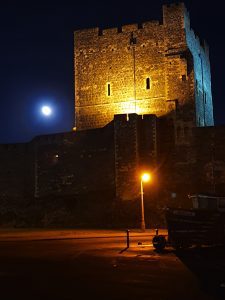 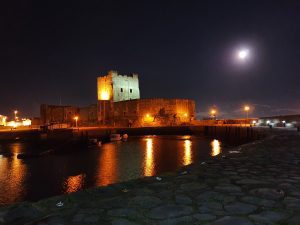 You won't believe the stunning beauty of the Giants Causeway - See for yourself!